In researching the work of Leo Acker and other commercial photographers such as Adrian Muller I was interested to compare the lighting used with that of the test shots.  Most are very well lit as was Paula’s set, however, I was planning on something very different for my still life.  After feeling very comfortable technically with a variety of test shots in the  studio, I wanted to use the lights from laptops to illuminate the set.

It was important for me to grow and challenge myself this term both in technical terms but also for my shots to say something.  In my still life, the current political climate and information wars held over multiple continents was my theme.  To challenge myself further, I would not be using studio lighting, instead opting for the light emitted from laptops to illuminate the set.  This poses numerous challenges as I would need to shoot at below 1/60sec for to capture light from the screen (refresh rates are normally 60 Hz), which means camera shake needed to be controlled.  The shoot was going to need tripod and shooting cable.  Additionally, I wanted to use a wide angle zoom lens (Nikkor 18-35mm f/3.5-4.5 AF ED), which was to ensure I could frame more accurately and have the flexibility to grab the scene as I wanted.  f 3.5 is not super fast, which was going to mean shooting well below 1/50sec.

Louise and Holly really helped with the shoot, as it took far longer to setup and get the shot than anticipated.  Holly was particularly mindful of health and safety, given the number of extension cables and electrical items in the set.  We were all very vigilant in this area….I did experiment with studio lighting in the shoot, but the atmosphere and overall effect were just lost.  The final image I was much happier with, which was taken at 1/15sec, f/11 (wanted a relatively deep depth of field), fully lit by the computers in the set.

Technically, I was really pushed in this shot, touching on long exposure photography in the studio and running out of time!  The final result was pleasing with some editing in camera raw, to adjust exposure just slightly.  A wide angle zoom really helped with the framing of the set and colour balance was set correctly this time.  The surface appearance of the metal in the hard drive I wanted muted and Light: Science and Magic has an entire chapter dedicated to metal in surface appearance.  The draped flags going from dark lighting into dark edges of the image I feel has worked well.

My modern take on still life is really a reflection of what I see as happening in the world today and a nod to the Dutch Masters use of semiotics in still life, as they inspired me to think symbolically of  our geopolitical climate.  Im pleased that I was able to shoot what I envisaged and say something.  Its definitely not to everyones taste, but last term struggled to say anything in the medium.  Vincent Borrelli cropped up in one area of my research and was so impressed with how he communicates in his images.  I don’t think this image leaves room for doubt as to what its communicating.

It was great to be involved in the various shoots of the entire group during the second term. This gave us all the opportunity to practice in the studio. It was also the first time I had used transmitters, with multiple fixed standing lights, having only used Nikon speed lights up to this point.

All my shots in the studio were taken in manual, ISO 100, SP 1/200 at f/7.1. Lighting using various combinations of soft boxes and direct lighting while were used and adjusted power to the needs of the subject. In my early shots I was interested in seeing how different focal lengths would affect the image and the depictions of the material and using a stronger side light, which would introduce shadows, something modern still life tends to avoid (Freeman, 2007). The side lighting was apparent in the early still life paintings of Pieter Claesz’s Still Life with a Skull and a Writing Quill, 1628, but most paintings in my research were front lit (CT – Still Life Research).

After a series of practice sessions, I really liked Paula’s idea of food and in particular the set for pasta.  I joined her in helping setup and practice shot with a longer focal length than I expected to use for my shoot (here 105mm DC NIKKOR f/2, normally a long portrait lens).

I was quite pleased with these first shots, but really noticed how framing was going to be very important irrespective of the focal length involved; here, it helps to focus on the subject rather than take the whole set in:

While we were shooting I became acutely aware the white balance on my camera was off.  Something I hope to learn more about is post production and only recently started looking at techniques in image software production.  This would have to be corrected later.

In these images the framing was off, but the side lighting resulted as I expected, with shadows working in the scene.

The last few shots came out a little better, after turning up the power on one light (soft box attached).  I also edited these images for better white balance and felt this was a good start to test shooting still life in the studio:

Before starting in the studio, spent some time reading Light: Science and Magic.  Many of the lighting concepts in still life were covered initially from the reading last term (Freeman, 2007), but not nearly at the depth needed to understand the placement of objects, overall lighting, surface appearance, shaping and contrast.  Softer lighting here really helped with the surface of the eggs, but not to the extent that the image was blown out.  The histogram on all these shots was full with no clipping – very pleased the exposure kept highlights and shadows from being burnt from digital negative.

Semiotics
The use of signs and symbols have been prevalent in global cultures for millennia, an interacting devise of communication stemming from the human condition and its consciousness. The two part process of interpreting the world around us and then describing that interpretation with symbols, either through obvious or subtle & coded messages, touches on so many areas of our lives today as it has through history. It’s therefore no surprise Semiotics recurs through many academic disciplines; linguistics, dilectics, religion, art history, philosophy, branding, cryptography, musicology….

So diverse is Semiotics, that for some there is no other way of communicating, such as Robert Schumann’s musical sphinx to Clara in his piano concerto 1845, following being committed into an asylum and denied access to his wife or family. What interests me even more is the human desire is so strong to solve codes and understand symbols, the entire process is self perpetuating. An endless cycle. The need for us to form patterns and make sense of them, moving from high to low states of entropy, doubtless will ensure Semiotics endure, never to leaves us (The Posthuman Condition, Pepperell, R., 1995).

Pictorial Semiotics I found a really interesting facet of material related to classical still life paintings. This was the source of inspiration for the first of three submissions in the second term. With a heavy emphasis on the technical elements of studio flash photography, the use of light is a fundamental feature of both classical art and the ultimate submission. To grow and develop my photography I was keen this term to say something through the submissions within the context of the brief. 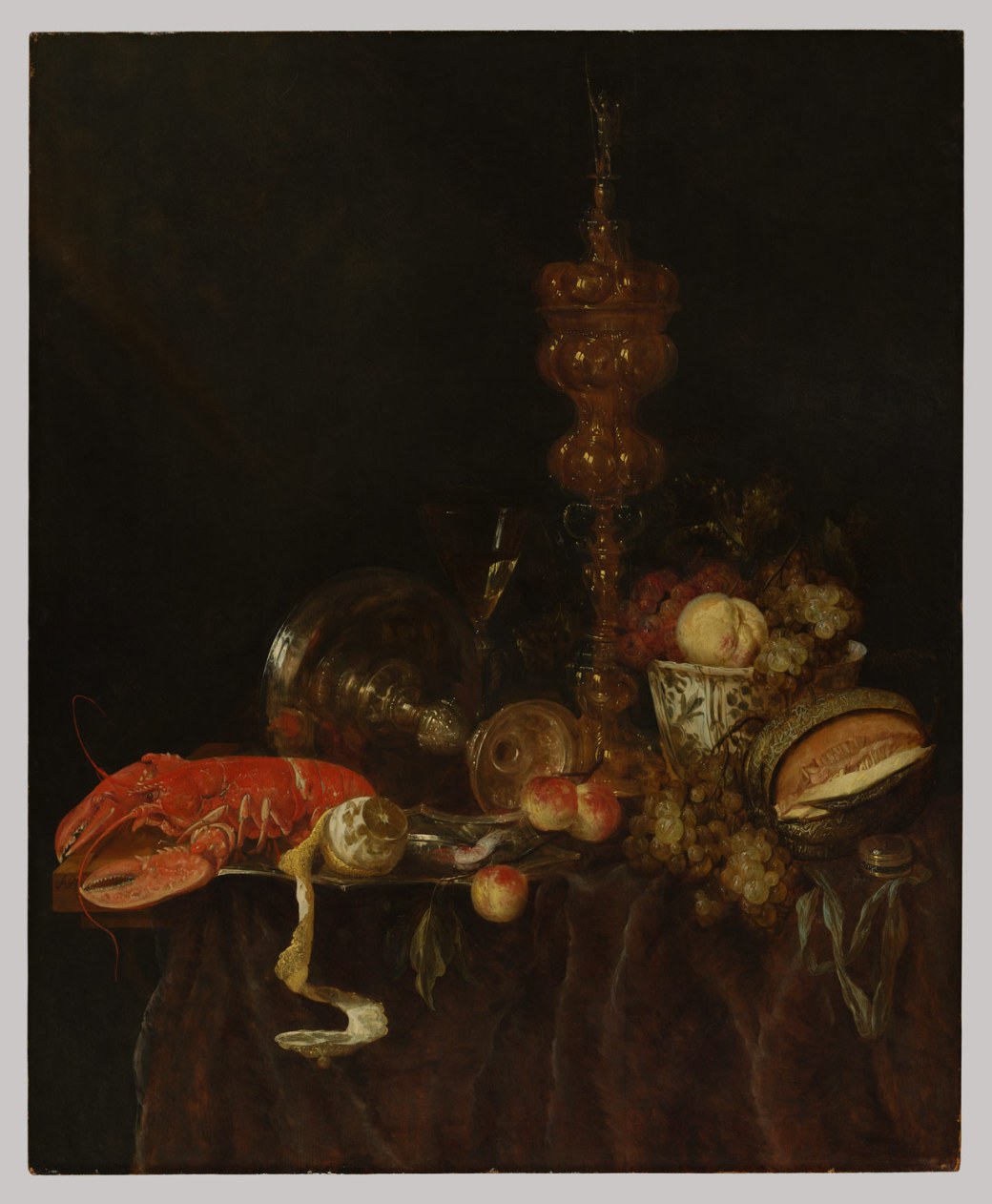 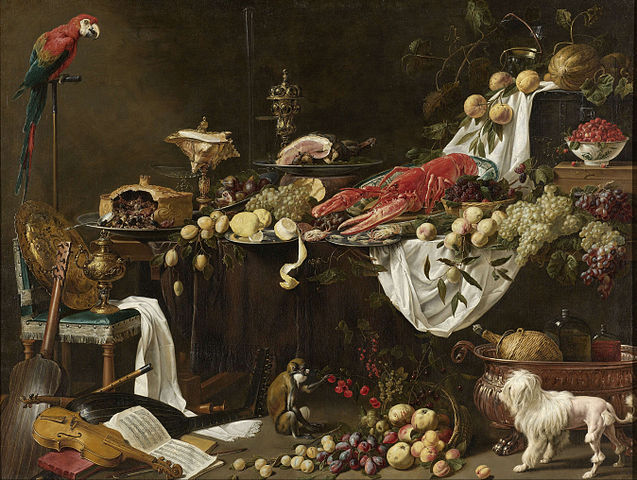 Harmen Steenwyck ‘Still Life: An Allegory of the Vanities of Human Life: 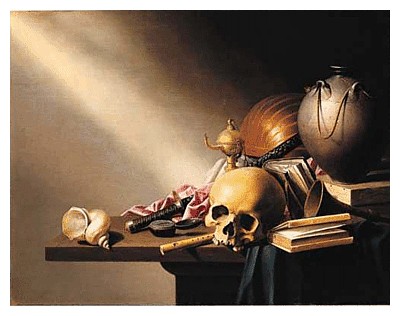 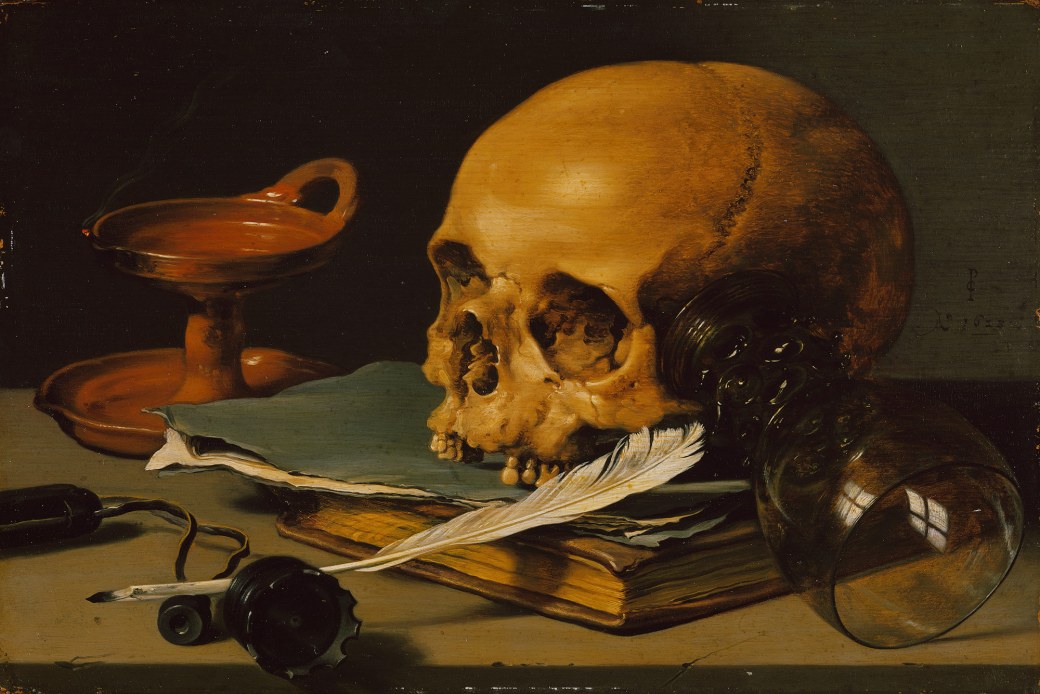 Similarly, the briefness of life is also depicted in Vanitas with Violin and Glass Ball Pieter Claesz: 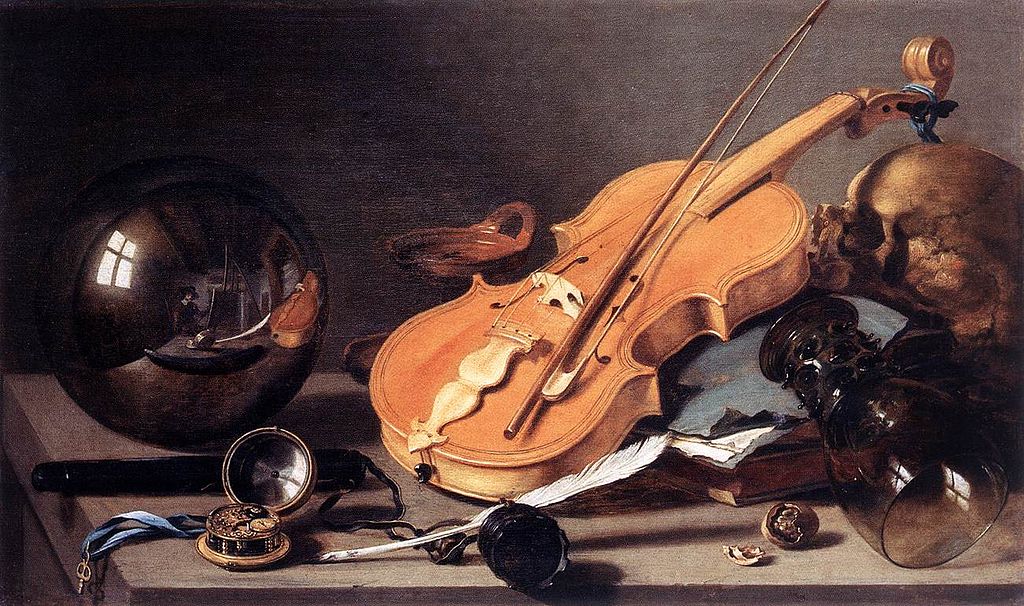 Claesz incorporated a self portrait in the glass bowl, making this particular still life stand out. His work also captured the four elements, earth (skull), fire (candle holder), water (glass) and air (feather). The fragility and speed of life’s passing, with warnings against materialism and over indulgence, are ever present in many of the still life subjects in Northern Europe, echoed in the art of Souther Europe (Met Museum – Southern Europe).

Through my research I was really struck by ‘Allegory of Charles I of England and Henrietta of France’, Carstian Luyckx: 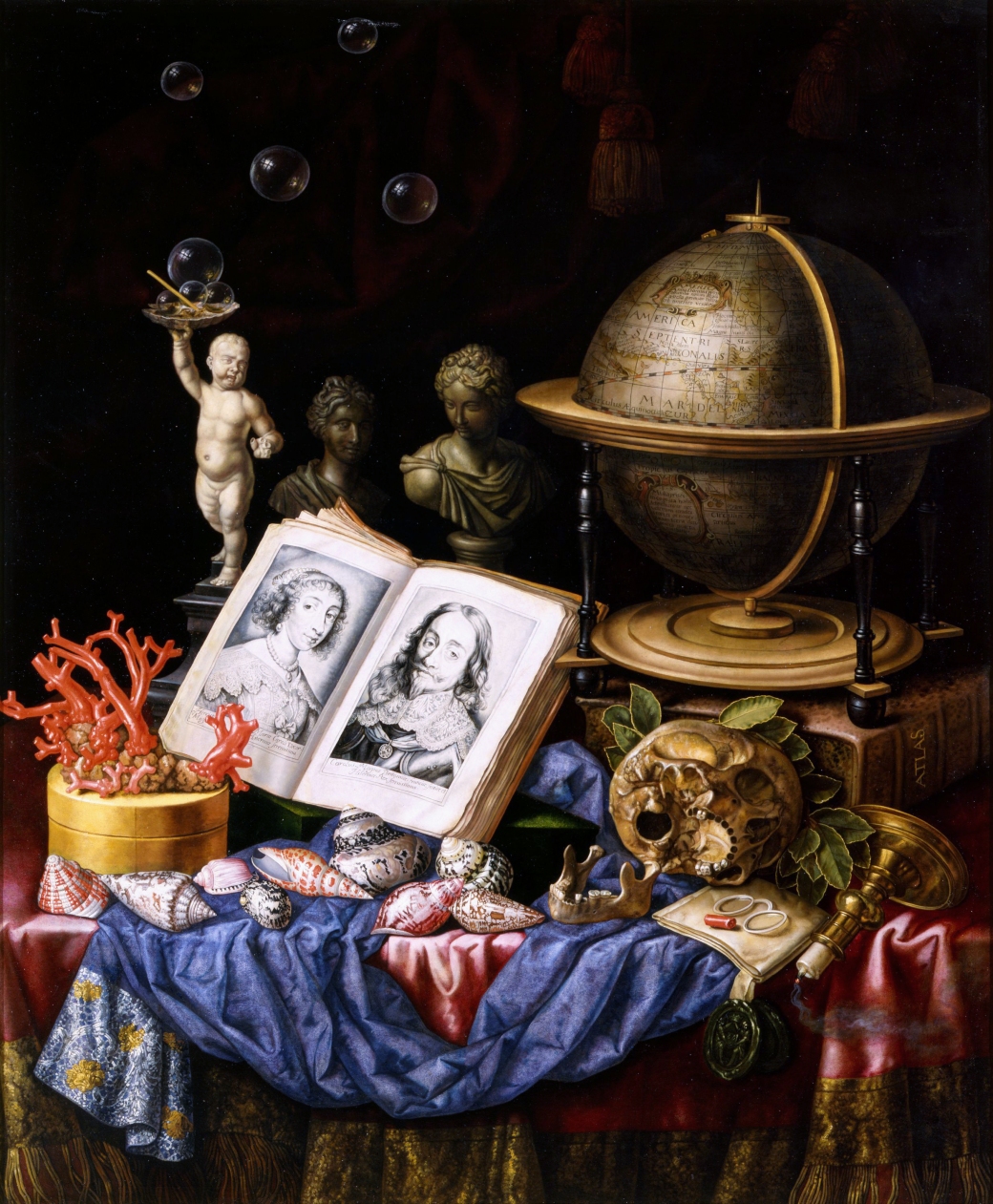 The same themes of life and death are present, given Charles was beheaded at 44 years old. What I really liked was the very obvious statement of what hunger for power and glory can do to an individual, in this case enveloping Charles’s mortality. This was the first example I had seen in which power and politics on a global scale was memorialised. I did not find too many further examples of this in my research, but felt something I wanted to explore in the studio. All the examples I looked at referred to the issues relevant at the time, so while they may appear dated now, there was especial meaning attached to the subject and semiotics of these still life pieces.

The decision was made, I would portray a modern depiction of current power struggles in the form of still life within the studio.